Posted by ADMIN Posted on 6:43 PM with No comments 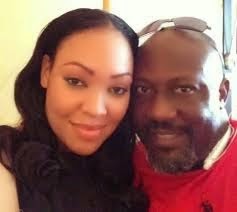 Last week, the internet was agog with leaked chats between Dino Melaye's ex -wife Tokumbo and his current wife, Alero..In the chats,Alero claimed she was tired of being beaten and has left him..She was apologetic to Tokumbo saying she has now felt what his ex went through.Now, she has changed her story saying her never beat her....

Her is what she told Stelladimokokorku:

Yes,Stella i exchanged SMS with Tokunbo but i only did that because i thought it would remain between us and besides i needed to connect with someone who might understand where i was coming from. Tokunbo sent me a long mail earlier this year detailing all the bad sides of Dino and what she had lived with.

At the point i contacted her,some of what she said made sense and because of my state of mind,i stupidly thought i could talk to her about some of her experience which i could relate with.The experience i refer to has nothing to do with violence in any form.The mail she sent me had a phone number and at the time i contacted her i needed to talk.I deeply regret contacting her and I feel bad that she made the contents of our exchange public even though i asked her not to and assumed she would be private about it. I also needed her to know that i wasn’t the reason her marriage ended,at the time i met Dino,he told me he was divorced and i believed him.
On Domestic violence Let me state here now that Dino might be a lot of things but he never beat me and that's the truth.there were just some things i couldn’t handle and that was what i referred to as living in Tokunbo’s hell for six months.I did not say he beat me.saying anything of such would be a big lie.I am not saying this because anyone asked me to, i am only trying to correct a wrong impression that has been blown out of proportion.Dino has never laid a finger on me.keeping quiet on this means consent to the falsehood being spread and I am speaking up now to correct the wrong impression my chat with Tokunbo might have caused.
On why she left ‘’I left for reasons best known to Dino and i which had nothing to do with any form of Violence towards me. I just needed some space and quiet to think but regardless of my actions and his imperfections,i still hold him in high regard and still love him very much.Dino is a good man but like everyone else he is not perfect and he is still my husband’I said a lot of things concerning Dino to Tokunbo out of anger which i deeply regret but never say never.Life is always full of surprises''.