Home » Sylvya Oluchy » ''I Can Act N*dé, It's Not A Big Deal – Award Winning Nollywood Actress Reiterate Are Desire To Act N*de

''I Can Act N*dé, It's Not A Big Deal – Award Winning Nollywood Actress Reiterate Are Desire To Act N*de

Posted by ADMIN Posted on 4:47 PM with No comments 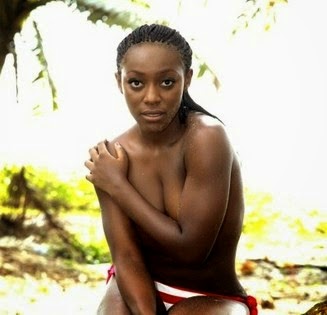 Nollywood actress, Sylvya Oluchy, who won the Most Promising Act of the Year award at the 2013 Best of Nollywood Awards, once said she was ready to act n*de if need be, prompting so many people to criticise and label her a desperate

Reporters again cut up with her to know if she really meant what she said or if she has probably changed her mind following all criticism. Read excerpt from interview below....

You recently said you could act n*de in a movie?
There was a bit of mix-up in that story. They asked me what I think of nudity in movies and I said it depends on the movie. If you’ve watched The Gods Must Be Crazy, the nudity in that movie was done for accuracy because people then went about nudé.

Can you do a sex scene in a movie?
Yeah. I mean in Lekki Wives I have a couple of kissing and romantic scenes, no nudity but there was a lot of kissing and lots of making out so it comes with the job.

What’s the craziest thing you can do in a movie?
You never know what’s going to come your way or you never know I might just see myself in Hollywood one day, you never know so I never say never. N*dity is not a big deal.

You released some semi-n*de pictures on the beach...
It depends. There’s a level you’ll get to in your modeling career that you just have to do things like that. The highest paid models, the ones you see on Victoria’s Secret runways, I’m sure they do stuff like that. It comes with the territory so before you go into a career like that, you have to prepare yourself.

Even though that’s not really where I’m channeling myself to, it depends on why you’re doing it and the outlet. Gisele Bundchen is like the highest paid model in the world today and I’ve seen a lot of her topless photos for Vogue and other things, she’s just doing her job.
Follow @todaysgist
Tweet