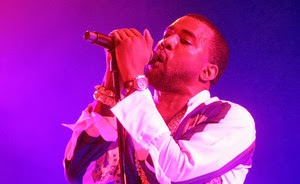 Kanye West has promised to keep his mouth shut from publicly criticizing  and saying negative comments for about six mouths after realizing harshly that he may have used his mouth to chase his fans away. This was evident in the empty seats witnessed in his recently concluded  Yeezus tour.
In his latest rant during the last stop of his Yeezus Tour in Toronto on December 23, Kanye promised not to say anything negative about anyone or anything for at least six months…

Everything I’m saying that’s not allowed, soak it in right now. This might be the last time y’all hear me talk s*** for a long time. Might be another like 6 months, at least. You’re just gonna have to run back the interviews and sh*t if you wanna hear some realness!

“I’m gonna tell y’all right now that all of the ideas, what they call the rants the streams of consciousness that I express, I told y’all, save those tapes and everything because I’ve decided to completely focus everything in 2014, on new ideas and on creative outlets. I’m not [going to] ever bring up Nike again, and the only way I’ll bring them up is in a positive light … I’ll never bring up the Grammys again in a negative light, because I actually appreciate the 21 Grammys that I did win.”

“Because I’m not [trying] to be a dude that has all the opportunities in the world and only focuses on the negative, or complains about it, or just gets in some type of zone that just having to turn up all the time and sh*t. So I’m letting you all now that this is the last Yeezus show, and this is the last time you’ll ever hear me say negative about anyone..”